Urchin was a web analytics software developed by Urchin Software Corporation. The original company was founded in 1995 by Paul Muret and Scott Crosby. Urchin was originally a software to evaluate web server log files, but then developed into a good web analysis tool (for those times, maybe in some points even for today).

In April 2005, Urchin (at that time in Version 6) was taken over by Google. After a last release (which was called “Urchin 7 by Google”) the official Urchin history ended and the way of Google Analytics began. In fact, parts of Urchin should be felt in Google Analytics for many years to come ...

Here an example how the Urchin (by Google) Tracking Code looked like:

The "_userv = 2;" was the statement to include the Google Analytics Tracking Pixel (GIF) as well as Urchin.
The Script urchin.js is still available on the Google Servers.

The legacy of Urchin

Some things in Google Analytics are still reminiscent of Urchin today. Up until Google Universal Analytics, a Analytics Property IDs began with UA - this was the abbreviation for Urchin Analytics. Or you surely know UTM parameters. Did you know that UTM stands for "Urchin Traffic Monitor"? And so there are still a few more points that remind us of Urchin in Google Analytics to this day.

The Story of Urchin 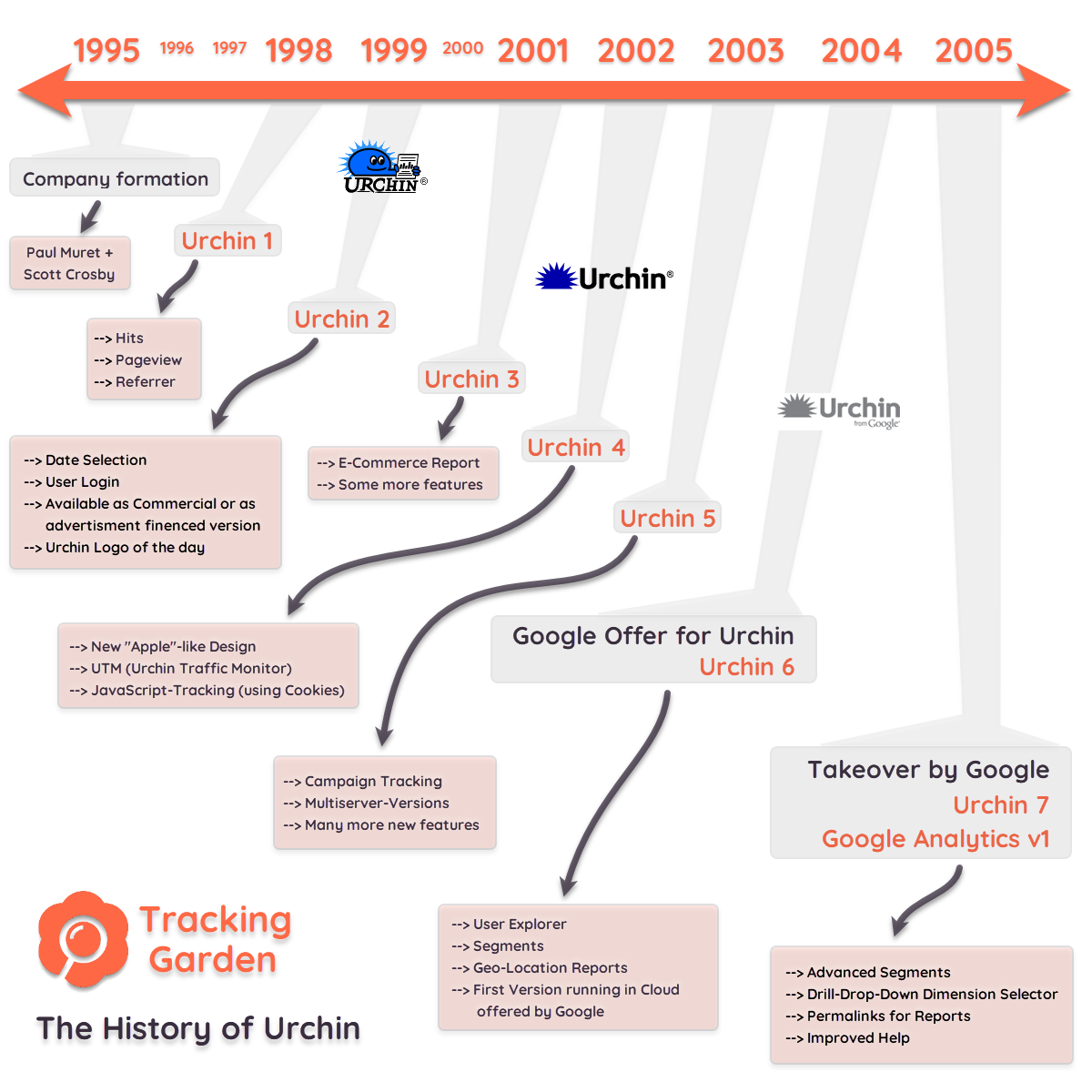 The story of Urchin was written based on the story from https://urchin.biz/urchin-software-corp-89a1f5292999 and various captures from urchin.com on the WayBackMachine (archive.org). There is no claim to correctness. We would be very happy to receive information and reports on false statements!

After college, Paul Muret and Scott Crosby shared an apartment in San Diego. It was 1995 when they started a company to offer business websites together. They got a start-up capital of $10,000 from Scott's uncle and a desk in his office (from his company “C.B.S. Scientific”). With the money they bought a Sun SPARC 20 as a web server and rented an ISDN line (which was very expensive at the time). Step by step they won their first clients and got a first income through monthly fees. They rented their own office and Scott's brother Brett Crosby joined the company in 1997. Slowly they also gained larger customers. All customer websites were still hosted on a web server and still shared that one ISDN line.

Paul programmed a simple log file analysis system that calculated the website traffic and displayed it via a web interface. Then he added some morte metrics and reports, such as pageviews, referrer and hits - the first version of Urchin was born. Further development brought date selection, user login, etc. to Urchin and it was presented to the first customers at a trade fair. At this point in time, Urchin was still very simple software for analyzing log files.

Through Brett's girlfriend they got  in touch with Honda.com and won them over as a customer - Urchin became the standard web analytics software for Honda.com. This determined the future strategy. Jack Ancone joined the company as (initially) CFO and the company moved again. At that time the company was called "Quantified Systems Inc.", the business areas were web development, hosting and software development.

Further development of Urchin brought in January 1998 the first "Pro" version for $199 (which was the smallest version at the time). Shortly thereafter, it was decided to focus the business on software development, all other business areas were abandoned. As a software company, new capital was needed and it managed to raise $1m.

Urchin has now been published in two versions, the commercial "Urchin ISP" and the free "Urchin ASAP", which should be financed by displaying advertising banners. The billing model for the advertising banners was, in addition to the CPM (cost-per-mille), also a CPC (cost per click) model for a banner on top of the Urchin web interface. There was even an "Urchin of the day", so the Urchin logo was regularly enriched / replaced with current graphics (partly animated gifs).

In 1999, Brett Crosby tried to promote Urchin 2.0 and after some struggling he managed to get an appointment with Rob Maupin from Earthlink. The web interface at the time was far too blue for Rob, but he gave Urchin a chance.

After a few software changes, Urchin became the standard web analytics software for all Earthlink-hosted websites. Earthlink paid $ 4,000 a month for this.

We have now reached the year 2001 and Urchin was in version 3. 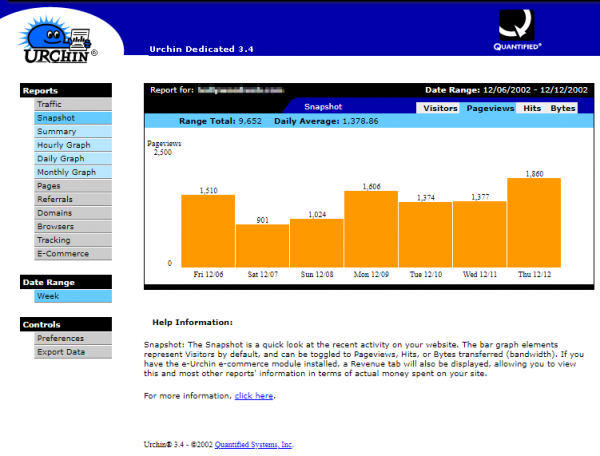 The company was renamed the Urchin Software Corporation. Business was doing well and Urchin decided to raise more money for further growth - they managed to win $7m, at least confirmed. Because before the payout came September 11, 2001, which messed up the investment plans. Urchin had already invested further due to the money pledges and now had a liquidity problem. Employees had to be laid off and an office quit. There was no choice but to solicit money from wealthy uncles (notably Chuck Scott and Jerry Navarra). Between 2001 and 2002 there was a hard time for Urchin. Negotiations became more exhausting, but some employees waived part of the salary (some even completely) and so it went on.

Urchin 3 was available in different versions at the time:

In the end, it was decided to simplify the business model and only sell (and simplify) business deals, even if they made less money.

In 2002, Urchin 4 appeared and came in a new look that was reminiscent of Apple's aluminum look:

The biggest innovation in Urchin 4 was the "Urchin Traffic Monitor" (UTM). In addition to the analysis of the web server log files, a JavaScript tracking was added with the use of browser cookies, e.g. to recognize visitors. That was the most important step for the later development of Google Analytics.

In Urchin 5 E-Commerce tracking was introduced, as well as campaign tracking and some other stuff, even multi-server versions. 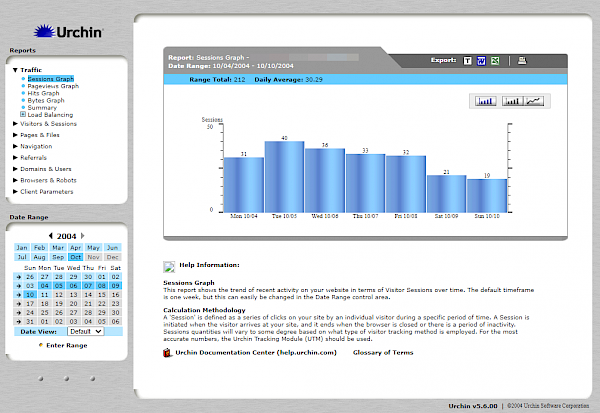 Scott Crosby wrote in his Urchin Story (in 2016) about Urchin 5: “Urchin 4 was the first release I really felt could compete against anyone, and not just with regard to back-end performance. But Urchin 5 was superior in every way, and I’m sure thousands of instances still run to this day. If anything, Urchin 5 was just too much of a good thing.”

With Urchin 6, the last version under the name Urchin (available from Google or fron Urchin authorized dealers), the "Individual Visitor History" was introduced, today known as "User Explorer":

An Urchin 6 Single licence costed $2995, for hosting companies $5000 per month per physical datacenter.

Urchin 6 was the first version that was also available as a cloud solution (for $500 a month). This model sold very well and in summer 2004, Urchin was the world's most popular web analysis tool (in terms of the number of installations). Urchin also exhibited at the Search Engine Strategies conference in San Jose in 2004. It was there that Wesley Chan and David Friedberg from Google met Urchin.. A few weeks later, Google made an offer to buy Urchin. There were also offers from others for Urchin, e.g. from WebSideStory - they even offered more. But Urchin was finally sold to Google and the sale was completed in April 2005 (Google had around 3,000 employees at the time, so it was still quite a small company in comparison).

The installation guides for Urchin 6 are still available, here e.g. for Windows:
https://support.google.com/urchin/answer/2591336?hl=de&ref_topic=2591275

What are the main differences between Urchin 5 and 6 (copied from the Google Urchin help):

Platform Support:
- Broad range of Linux platforms supported with only 2 builds (Linux 2.4 and 2.6 kernels)
- Added support for FreeBSD 5 and FreeBSD 6
- Dropped support for MacOS X and Solaris (may be reconsidered if sufficient demand is demonstrated)

Data & Storage:
- Profile databases now default to 100,000 records/month (instead of10,000) with option to increase up to 500,000 records per month
- Expanded Geodata: full set of geolocation data from Quova, replaces domain-only MaxMind data
- Monthly table record limit increased from default of 10,000 to 100,000 records
- 50 monthly files per profile, now organized by subdirectory

Security:
- Urchin 6 has gone through a thorough quality assurance for cross-site scripting (XSS) and XSRF vulnerabilities

Urchin was now part of Google, and Urchin 7 was the last version named Urchin, with the Google addition: "Urchin 7 by Google". Urchin 7 was free for everyone (initially via an invitation model). Now the spread of "Urchin by Google" began explosively. 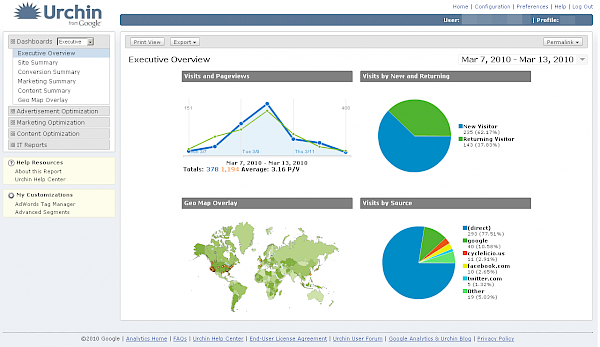